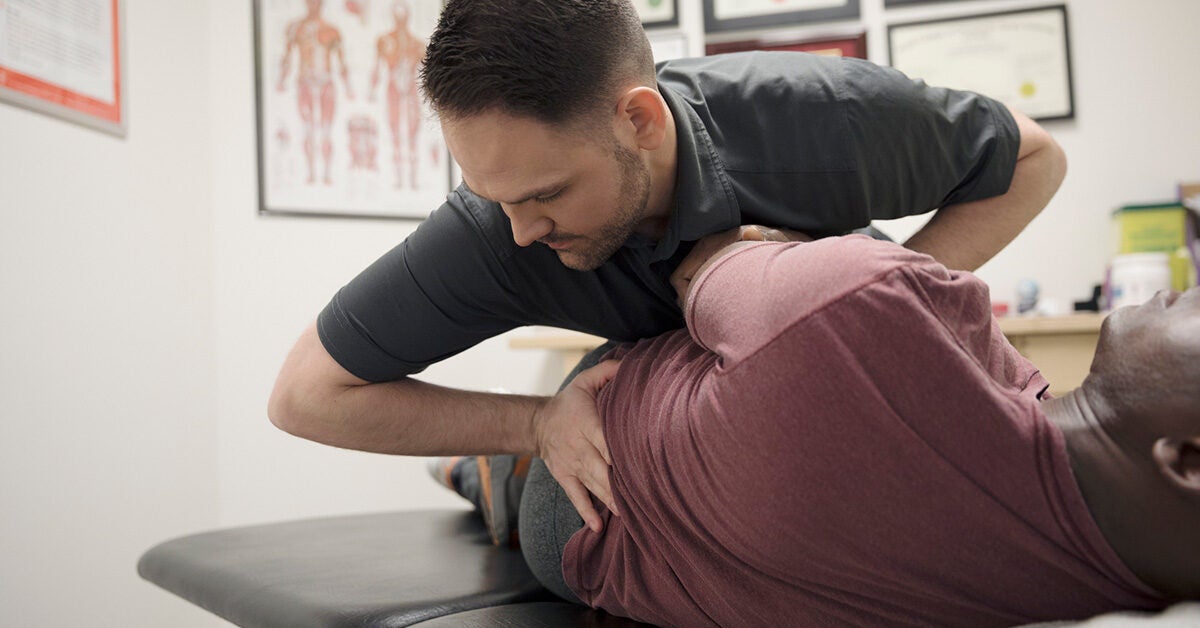 Chiropractic is a form of complementary medicine based on the idea that your body can heal itself with the help of specific practical manipulations by a trained professional. These manipulations will help realign your joints and may lead to pain relief.

Chiropractic treatment can help relieve pain from conditions that affect your:

Chiropractic treatment is often focused on your spine, but may focus on other parts of the body depending on what you’re dealing with.

Chiropractic treatment shares some similarities with physical therapy, and certain conditions may benefit from treatment with both types of therapy.

In general, chiropractors are more likely to use hands-on manipulation to relieve your symptoms. Physiotherapists usually place a greater emphasis on rehabilitation from injuries through stretches and exercises.

Neck pain is a common problem, especially if you sit for many hours a day, tend to arch your neck frequently to use your phone, or have poor posture. A chiropractor can help relieve your neck pain by realigning your spine and relieving tension in your neck muscles.

An older 2012 study found that 12 weeks of spinal manipulation was more effective than drug treatment in treating nonspecific neck pain in a group of 272 adults at 8, 12, 26, and 52 weeks.

A 2019 study found that manipulating the cervical spine can help relieve neck pain in the short term by changing the levels of neuropeptides in your blood. Neuropeptides are proteins made in your nervous system that act as neurotransmitters, or hormones.

People with chronic pain are often given prescriptions for opioid pain relievers to relieve their symptoms. However, chiropractic treatment may reduce the need to take these pain relievers.

A large 2020 study compared the number of prescriptions for opioid pain relievers for adults who only went to their doctor or to both a chiropractor and doctor for back pain management.

The study found that adults who visited a chiropractor were less likely to get an opioid prescription for their pain than those who just saw their doctor.

Chiropractic care can be a great alternative to more invasive alternatives such as surgery or injections to treat short-term or chronic back pain.

The American College of Physicians recommends that doctors encourage people with chronic lower back pain to seek non-drug treatments first before taking medication to manage their pain. Some of the recommended treatment options include:

A 2017 study review found that spine manipulation was associated with moderate improvements in short-term back pain and function compared to placebo treatment over a period of up to 6 weeks.

Manipulating the spine can be effective in treating tension headaches and headaches that develop in your neck.

A 2016 study found that 6 to 8 sessions of cervical and upper thoracic manipulation in people with chronic headaches were more effective than exercise and exercise at relieving pain. This was still the case with a 3 month follow-up.

6. Cheaper treatment for chronic back pain

Chiropractic treatment can be a cheaper alternative to traditional chronic lower back pain management.

In a 2016 study, researchers looked at the potential financial benefits of chiropractic treatment for Medicare beneficiaries with chronic back pain.

The researchers found that people who received chiropractic treatment had lower treatment costs overall. The study also found that their treatment duration was shorter than those who had conventional medical treatment.

For example, in a 2015 study, researchers found that a group of 544 people in chiropractic had high levels of satisfaction.

8. Reduces the symptoms of scoliosis

Chiropractic can help improve the Cobb Angle of people with scoliosis. The Cobb angle is a measure of how much the spine deforms from side to side.

A 2016 study found that the Cobb angle improved in a group of five children with scoliosis after 8 weeks of chiropractic treatment. Noticeable improvements were noted after 4 weeks of treatment.

Chiropractic treatment can potentially help correct poor posture, especially if your poor posture is caused by sitting too much.

A 2017 case study examined the effects of chiropractic treatment on a 27-year-old woman suffering from back pain, neck pain, and headache due to a hyperkyphosis posture. Hyperkyphosis is commonly known as the humpback pose.

After 30 treatments over 6 months, she showed significant improvement in her posture and pain relief in both the head and neck.

Spinal adjustments can potentially improve your athletic performance. This could be due to increased joint mobility, less pain, and less tissue restriction.

However, there are still some questions about whether adjustments to the spine improve athletic performance. A review of the studies in 2019 found that there was no improvement in performance in people with no symptoms.

Chiropractic adjustments can be effective when used to treat pain caused by an injury.

5 individuals, together with 4 of a household, killed in accident close to Chennai

Tami Meker - May 23, 2021
0
The accident occurred in Madurantakam when a car belonging to a family from Chennai collided with a truck Four family members, including three women,...

7 Issues You Ought to Know If In A Myrtle Seashore Automobile Accident MyrtleBeachSC...

Tami Meker - June 2, 2021
0
If you are involved in a car accident, your insurance company will hire an appraiser to assess the damage caused to your vehicle as...
© All Rights Reserved By Chiropractorsdailynews
MORE STORIES

Is there a post-pandemic alternative to purchase, promote, and advance chiropractic...