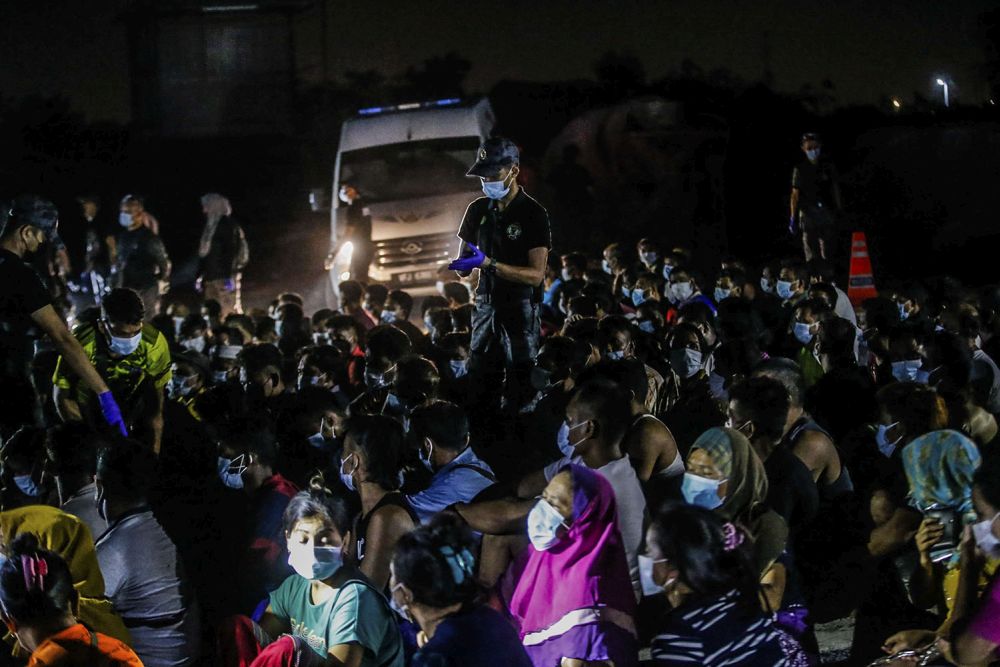 Immigration officials rounded up foreign workers in a raid on a construction site in Cyberjaya on June 6, 2021. – Picture by Hari Anggara

Recalling Interior Minister Datuk Seri Hamzah Zainudin’s remarks on May 29 and June 3, the coalition said it had created the impression for many that the government had decided to launch a mass plan to arrest and detain undocumented migrants short period of time.

Mai Hamzah said 800 roadblocks would be erected across the country once the ongoing full lockdown begins on June 1, which includes immigration officials.

On Tuesday he stated that the government is rounding up migrants to vaccinate them against Covid-19, otherwise they would refuse.

Hamzah added, however, that the detained migrants will not be vaccinated if they do not have papers as their identities cannot be otherwise established.

The coalition described the current approach to the arrest and detention of undocumented migrants as one that further complicates efforts to combat the pandemic among Malaysians.

“Such operations will intimidate foreign workers whether they are documented or undocumented. In fact, such actions would lead them to avoid any government official and go into hiding.

“So this will undo the government’s efforts to establish herd immunity in Malaysia. Herd immunity requires vaccination for 80 percent of the Malaysian population, including the migrant community, “it said.

Failure to reach the vaccination quota of 80 percent of the population will delay the country’s economic recovery and prolong the suffering of the people, added the coalition in its statement.

“There is a strong possibility that the arrest and detention of undocumented migrants at this point will result in new buildups of Covid-19 in immigration detention centers.

“This will increase the spread of Covid-19 among undocumented migrants and will also infect immigration officials, police officers and court staff (those involved in pre-trial detention) and their family members. This possibility can and should be avoided, ”said the coalition.

It added that the immigration service lacks the capacity to arrest the estimated two to three million undocumented migrants in the country and send them back home.

“According to the Malaysian Human Rights Commission (Suhakam), as of July 1, 2020, immigration detention centers can only accept 12,530 detainees who have exceeded their capacity with up to 15,163 detainees.

“In addition, more than 95 percent of undocumented migrants work and contribute to the national economy. In fact, the economic activity of our country also requires their services, ”said the coalition.

It reminded Hamzah that any action plan taken must be based on clear, objective and reasonable scientific analysis and that the current approach to arresting and detaining undocumented migrants is detrimental to the government’s efforts to control the spread of Covid-19 in Malaysia will be.

Tami Meker - February 2, 2021
0
Five practical tips from the experts to help you feel good and stay strong. Entrepreneur New Years Leader Be inspired by the business resources in our...

5 Holistic methods to get a greater nights sleep

Tami Meker - April 13, 2021
0
Did you know that 35.2% of all adults in the US sleep less than 7 hours a night? If you're reading this, you...
© All Rights Reserved By Chiropractorsdailynews
MORE STORIES