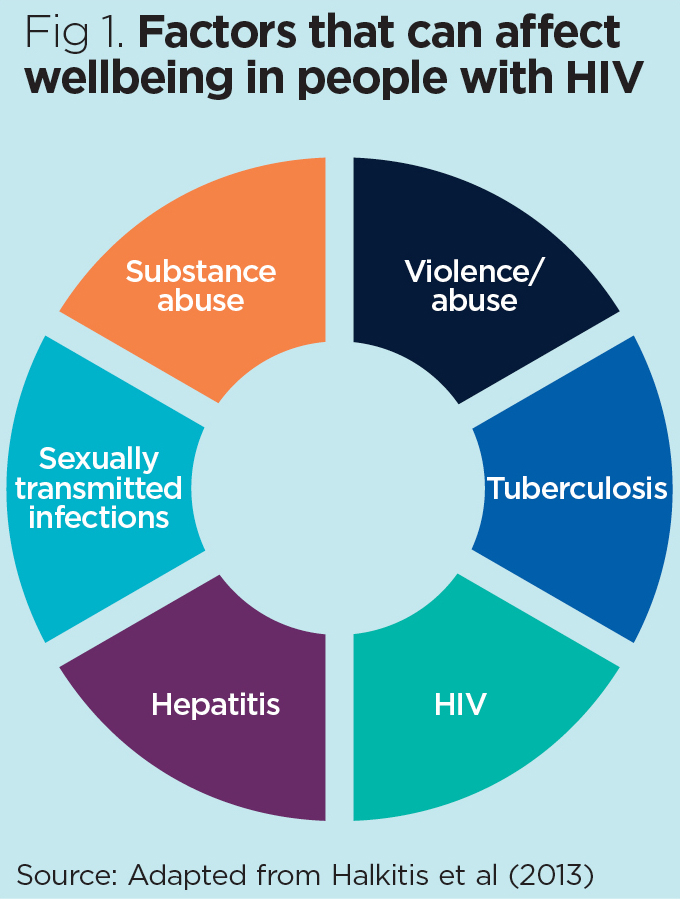 HIV is treated with anti-retroviral drugs. People are remaining healthy into older age, but comorbidities and other factors affect wellbeing

This article is the third in a three-part series about HIV. It explores the holistic management of HIV, including medical care and the wider factors that affect the health of people living with HIV. Part 1 discussed HIV’s prevalence, pathophysiology and modes of transmission; part 2 discussed its prevention, symptoms and diagnosis.

In the UK, we now live in an era of successful and accessible HIV treatment, which helps to enable normal life expectancy and good physical health. Moreover, people living with HIV who are receiving effective treatment cannot transmit the virus to sexual partners and can conceive a family without fear of vertical transmission to the foetus. However, despite advances in treatment and positive national trends for HIV care outcomes, the idea that all those infections can easily access care, take their medications, enjoy positive wellbeing and cease transmission has not become a universal reality. Many people living with HIV continue to experience a multitude of challenges that impede their ability to achieve these outcomes.

Nurses working in HIV care must have a clear understanding of the complex factors that determine good health for their patients and be able to work beyond the medical model to understand what drives poor health outcomes.

In the absence of a cure or vaccine for HIV, ensuring patients receive effective treatment remains the main goal of HIV medical management. Treatment aims to achieve an undetectable amount of virus in the blood (viral load) by using anti-retroviral drugs. An undetectable viral load means there are <40 copies of the virus per millilitre of blood – the detectable threshold for the test. The term ‘undetectable’ does not mean the person has no virus at all, and patients must be counselled on this terminology.

Anti-retroviral drugs work by targeting and inhibiting the different phases of the HIV lifecycle, which supresses the rate of viral replication. The HIV lifecycle was outlined in part 1 of the series and is briefly refreshed in Box 1.

HIV has a high speed of replication and each infected CD4 cell can produce thousands of new virions during its short lifespan, equating to millions of new virions being created every day (De Boer et al, 2010). Due to the speed at which HIV replicates, mistakes are often made when building the new virions; these are called mutations.

A virus without any mutations is called a ‘wild type’ and is the most dominant and ‘fittest’ in the blood. Viruses with mutations are often weaker and inferior, and are sometimes unable to replicate. Most mutations confer no advantage whatsoever, but some confer drug resistance, which could prevent an anti-retroviral drug – or even an entire class of drugs – from working.

To combat drug resistance, combination therapy is now the standard treatment: patients are given three or four drugs from at least two classes (Table 1). As each class targets a different stage of the HIV lifecycle, if a mutation occurs that conveys resistance to one of the drugs, the other drugs in the combination will supress reproduction of that mutation. This combination is called highly active anti-retroviral therapy (HAART).

Before a patient starts treatment, or if treatment fails, a blood test can be performed for resistance testing. This test generates a report of the mutations present and their impact on each anti-retroviral drug. The reports must be carefully interpreted in conjunction with the patient’s drug history.

New ways of delivering HIV medications are also being developed, which may offer a solution to suboptimal adherence. Clinical trials are currently underway for long-acting injections, such as cabotegravir, an injectable anti-retroviral drug that patients receive once a month instead of taking daily tablets.

The British HIV Association’s (2016) guidelines are used to guide practice for anti-retroviral therapy and monitoring, and recommended as further reading. Below are some key points from the guidance:

In the UK, many indicators are measured to determine health outcomes for people living with HIV. Indicators published annually by Public Health England (PHE) include the:

PHE’s (2019) report demonstrates positive outcomes: 93% of people living with HIV in the UK are diagnosed, 97% of these are receiving treatment and 97% are virally suppressed. This exceeds the global target, set by the Joint United Nations Programme on HIV/AIDS (2014), of achieving “90-90-90”, and works towards the UK’s ambitious target of zero transmission by 2030.

Despite these remarkable achievements, there remain many people in the UK who are undiagnosed, living with transmittable levels of the virus, or not retained in care. Due to the recent years of financial austerity and national funding shortfalls, it also remains a challenge to maintain and extend current achievements. To close the gap and meet the 2030 target, we need to understand and engage with the hardest-to-reach populations, and work cohesively beyond the medical model to ameliorate the wider determinants of ill health.

“To meet the UK target of zero transmission by 2030, we need to understand and engage with the hardest-to-reach populations”

Shaping the future of HIV services

Many factors influence the health and wellbeing of people living with HIV. Stigma, alone, remains a significant issue, which has a profound impact on wellbeing. People living with HIV can now expect a normal life expectancy; this is creating a demographic shift, whereby services need to work as part of a wider system to address the challenges of ageing with HIV and associated comorbidities.

For many people living with HIV globally, diagnosis can intersect with other circumstances that work together to adversely affect wellbeing (Fig 1). It has long been clear that we cannot treat HIV in isolation and let other problems be addressed separately: effective HIV services connect with a multitude of others, such as welfare, mental health, addiction, tuberculosis and hepatitis services. The ultimate goal is not only to achieve an undetectable viral load, but also to address biomedical, behavioural and structural influences of wellbeing.

Bayliss et al’s (2017) report highlights the need for change in HIV services, stating they must be designed to reflect the long-term nature of HIV. The report highlights the fact that services operate in a fragmented and complex care system as a challenge that will make it hard to deliver integrated HIV care in the way it will be needed in the future. The report is recommended as further reading and offers many recommendations, including:

As health professionals, it is important for us to understand the broader factors that might influence wellbeing in people living with HIV, and the factors that could predict negative outcomes. Predictors of poor health have been extensively studied, but there has not always been homogeneity between different studies. A systematic review by Bulsara et al (2018) discusses some of the possible determinants (Table 2). 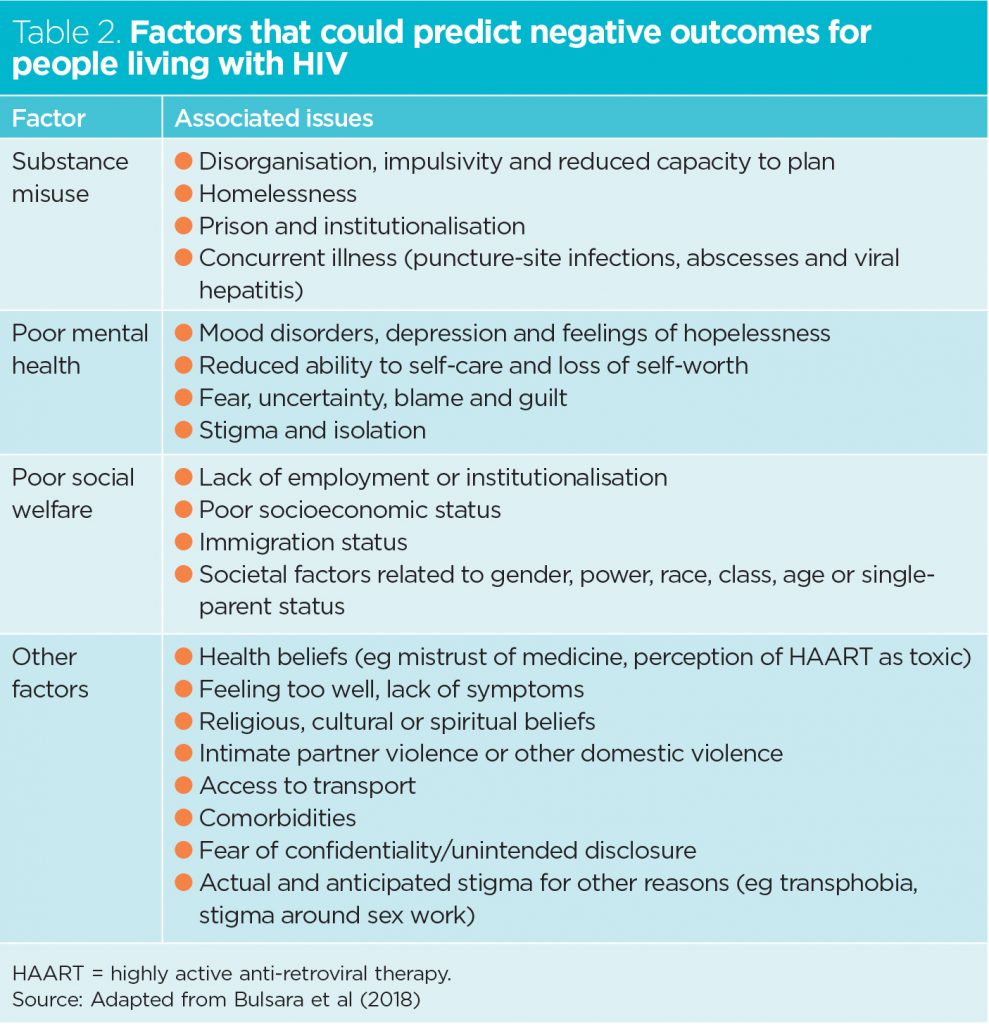 HIV and ageing: a new challenge for holistic wellbeing

Renal impairment is a leading cause of mortality and morbidity for people living with HIV. Renal function declines faster in the HIV population, with a prevalence of renal impairment of up to 38% (Ekrikpo et al, 2018), compared with 11-13% in the general population (Hill et al, 2016).

Renal impairment can often be a consequence of long-term exposure to HAART, because many of the drugs are excreted or metabolised by the kidneys. Commonly used drugs such as tenofovir disoproxil fumarate can be nephrotoxic, and other anti-retrovirals inhibit excretion of creatinine and cause a rise in serum creatinine. Renal impairment can also be caused:

The risk of having a myocardial infarction can be up to twice as high in people with HIV, even in those without major risk factors (Althoff et al, 2016). Weight gain in older people with HIV who are on HAART is well documented: visceral adipose tissue has been shown to increase by 25% after two years on HAART (McComsey, 2016).

Some anti-retroviral drugs have been linked with cardiovascular disease, insulin resistance, raised lipid profile and diabetes. Modifiable risk behaviours such as diet, alcohol and smoking are, therefore, relevant.

Cognitive dysfunction can arise from severe immunodeficiency, substance misuse, depression and multimorbidity. Microstructural brain changes are more common in people living with HIV, but also occur as part of the normal ageing process. HIV-associated neurocognitive disorder (HAND) can have a negative impact on memory, motor speed and psychomotor function. HIV-associated chronic inflammation, the associated long-term neurotoxicity of anti-retroviral therapy, and ageing are most likely to influence the pathogenesis of HAND (Holmes, 2020).

HAND is now rare in well-controlled HIV, but other conditions – such as Alzheimer’s disease and vascular cognitive impairment – may also have a negative impact on adherence and engagement with care.

HIV services should be resourced with the necessary expertise to conduct comprehensive health-needs assessments for patients living with HIV. The assessment should cover the holistic spectrum of individual wellbeing, avoiding a sole focus on their viral suppression and CD4 count.

Many HIV centres in the UK consist of HIV specialist nurses who are increasingly managing the cohort that is medically stable. Nurses are well placed to conduct these assessments on a regular and ongoing basis, given their experience, skill and therapeutic relationship with patients. Larger HIV centres provide access to specialist pharmacists, dietitians, psychologists, functional therapists and social workers to help patients achieve wellbeing. Peer mentors, support groups and charities also provide valuable support and resources.

The National HIV Nurses Association (2017) recommends an annual high-quality health review to enable patients to lead healthy lives and identify holistic needs, as well as aiding early detection and the prevention of comorbidities. Recommended for further reading, NHIVNA’s (2017) guidelines outline a set of practice standards for the annual review covering:

Holistic assessments for people living with HIV should always be longitudinal, as new challenges and obstacles appear or resolve across the illness trajectory. Assessments must always be treated with care; the information elicited may be sensitive or upsetting, particularly when discussing sexual partners, behaviours or health beliefs. Health professionals must always be non-judgemental and non-coercive; they must ensure that, instead of pressuring patients to disclose information, they know how to build trust and rapport over time, and can adapt their methods to deliver meaningful health messages.

Bayliss A et al (2017) The Future of HIV Services in England: Shaping the Response to Changing Needs. London: The King’s Fund.

Halkitis PN et al (2013) A holistic approach to addressing HIV infection disparities in gay, bisexual and other men who have sex with men. The American Psychologist; 68: 4, 261-273.

Public Health England (2019) HIV in the United Kingdom: Towards Zero Transmissions by 2030. PHE.

How one can Deal with Pandemic Grief From Therapists