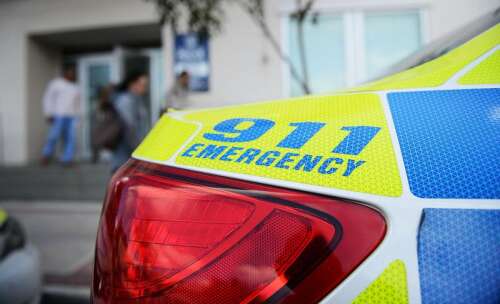 A police car in front of the Hamilton Police Station

A motorcyclist is in the hospital in severe condition following a collision with a car today after sustaining head and face injuries.

A police spokesman said: “Around noon, police received reports of a road collision with a car and motorcycle near the intersection of Middle Road and Morgan Road, Warwick.

“The male motorcyclist suffered head and facial injuries and was semi-conscious when the bike he was riding east collided with the car going west.

“The driver of the car was unharmed. Both vehicles were badly damaged. “

Ambulance services took the motorcyclist to King Edward VII Hospital in an ambulance for further treatment for his labeled injuries, the spokesman added.

The road, which was closed for a time when forensics and traffic accident investigators processed the scene, has now been reopened.

Anyone with information about this incident is asked to call Main Police number 295-0011.

How A lot Does Automobile Insurance coverage Go Up After An Accident? – Forbes...

A Automobile Accident That Isn’t Your Fault

What To Do If You Are Concerned In An Accident That...