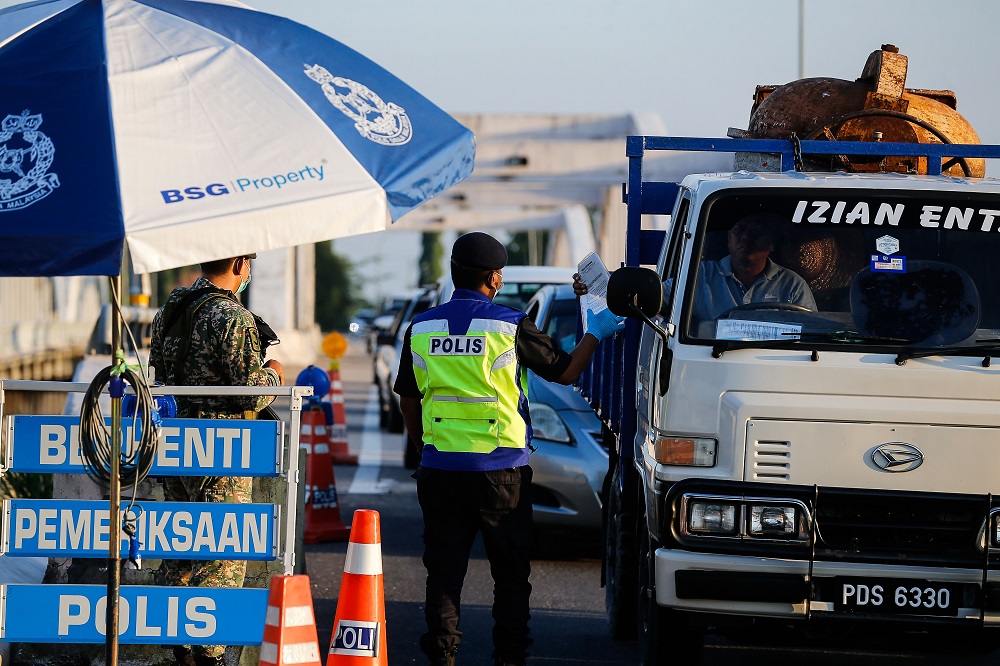 JUNE 1 – EMIR Research previously thanked and welcomed the government’s May 28 call for a Full Movement Control Order (FMCO) equivalent to MCO 1.0, beginning June 1, 2021 through June 14, 2021. This is an unpopular one But necessary measure to interrupt the chain of infection and our overburdened medical system to recover.

We at EMIR Research are also grateful to see that the government’s recently announced Pemerkasa Plus aid package has fully taken into account EMIR Research’s proposals for a holistic “survive-to-restart” package aimed at reducing the impact of FMCO on to temper the rakyat and too quickly – pursue vaccination.

It is particularly gratifying that the support of SMEs, the cornerstone of the country’s economy, was the focus of the Pemerkasa Plus package.

Police officers inspect vehicles at a roadblock along Jambatan Merdeka, on the Kedah-Penang border May 10, 2021.-Picture by Sayuti Zainudin

The provision of the three-month loan moratorium or loan repayments reduced by 50 percent over six months was granted and specifically granted to people in real need such as the B40 group, the unemployed and non-operational SMEs during the FMCO.

This is a welcome response from authorities and financial institutions. However, the M40 group and even the SMEs that are allowed to operate during the FMCO are likely to be affected (albeit to a relatively lesser extent), so that at least discounted loan repayment, if not a moratorium, should be considered for this group . Admittedly, the government can be limited in its ability to provide more direct monetary aid.

It is not without reason that EMIR Research has made this measure a top priority in its policy recommendations. In mid-2020, according to MCO 1.0, EMIR Research carried out qualitative research to determine the mood and concerns of the rakyat, including those caused by the pandemic. As incomes fell dramatically during MCO 1.0 (due to reduced walk-ins, dine-ins, etc.), fixed financial responsibilities posed a serious problem for many discussants on an individual and business level.

Many reported that managing their heavily leveraged positions became an insurmountable hurdle during the MCO 1.0 phases. Here the participants unanimously thanked the current government for their swift action in this situation and for imposing the moratorium. The discussants also all pleaded for an extension of the moratorium, which was also approved by the government last year.

It is also a welcome move by the government to help SMEs in the form of loans, grants and relief for the recovery of relief supplies, apart from a loan moratorium. Allocating RM 1.5 billion in microloans to finance working capital at rates as low as 3% would be invaluable to SMEs as the cost of short-term finance is a huge burden for any business, and especially for SMEs.

In order to further reduce the burden, hotel operators, shopping centers, airlines and other SMEs could also benefit greatly from supply discounts. If anything, these small businesses may need it more. Again, however, it is understood that the government seeks to optimally resolve a number of problems within the given financial constraints.

Another policy recommendation from EMIR Research was to introduce some kind of tenant protection system for at least two months. This suggestion was also based on the rakyat’s heartbeat. In the aforementioned qualitative study, the participants, especially those of entrepreneurs, emphasized their difficulties in dealing with debts and other fixed costs such as rents.

However, as EMIR Research also noted in its policy recommendations, it is important to ensure that such rental protection systems do not also bring landlords and property owners to the point of survival.

Presumably in the absence of data that would enable such targeted subsidization, a government solution to grant special tax reductions for homeowners who offer at least 30 percent rental discount for a further six months up to December 31st seems very appropriate. In addition, MARA entrepreneurs affected by the economic closure would receive a 30 percent discount on renting business premises from May to July 2021.

The third thrust proposed by EMIR Research to mitigate the impact of FMCO on SMEs and, through economic links, the general public was three-month wage subsidies limited only to those in the private sector.

In accordance with this proposal, Pemerkasa Plus grants the affected industries a one-month extension of the wage subsidy program. The idea that there would be a cap of 500 employees per application suggests that again this will mainly benefit SMEs and potentially save many jobs, which is an excellent move.

Aside from the above, EMIR Research’s proposal regarding direct cash transfers to vulnerable and earning rakyat and day laborers was not ignored, and taxi, bus and e-hailing drivers were thoughtfully included.

The Pemerkasa Plus package includes other equivalent solutions to achieve the same effect, such as: B. Tax exemption, discounts on utility bills, postponement of contractual penalties and fines, breach of contract protection and others.

All of this will go down very well with SMEs and rakyat in general, and will help minimize the negative effects of EMCO, and apart from the small considerations above, Pemerkasa Plus is generally considerate. The announcement that ministers and deputy ministers would not take their salaries for three months is also a strong gesture that they are “there” with the people.

The RM1 billion allocation from the RM5 billion direct injection shows that the focus is on increasing public health capacity, which is a much-needed action to ease the pressure on the health sector.

More than half of the RM 1 billion will be spent on related Covid-19 surgeries, the procurement of medicines and reagents, and the appointment of contract officials. It is hoped that this will include the latest test kits needed to detect the latest variants and source current and potential upcoming drugs and chemicals such as ivermectin, nitric oxide, and others.

Frontliners need sufficiently high-quality personal protective equipment and workplace equipment for greater safety and comfort. The Ministry of Health should check that the current equipment (personal equipment, workplace ventilation, etc.) is sufficient to protect against the airborne mode of transmission of Covid.

The renewal and reinstatement program is a welcome gesture both as a reward for their service and as an incentive to increase work ethic. However, considerations about permanent positions and other forms of career positioning must be continuous.

Measures to speed up the vaccination process such as designating a total of 1,000 general practitioner practices and private hospitals as vaccination centers, introducing drive-through vaccinations and using government vehicles to provide vaccines to the elderly and people far away from vaccination centers are all excellent decentralization strategies and a sign of this that the responsible ministries listen to public and professional suggestions.

However, these stimulus measures would be a waste if the lockdown does not achieve its intended purpose. In this regard, EMIR Research remains in its position that phase one of the FMCA must emulate the success of MCO 1.0 in the sense that a “total lockdown” must occur – the success of which enables the transition to phase two, in which economic sectors can gradually and after being reopened.

The success of Phase 1 depends on a complete lockdown or strict monitoring and enforcement of SOPs, especially for the eligible or essential sectors (some of which were known in the past as cluster contributors). Past experience gives cause for concern over reliance on SOP compliance by the public sector and business. Since MCO 1.0 had a duration of eight weeks, phase 1 of the FMCO can last longer than 14 days.

The empty streets during the early stages of MCO 1.0 seem a terrifying contrast to the heavy traffic, or at least normal traffic, which on 1st was an (albeit crude) indicator that economic activity was at levels above ideal become. The reported crash of the Ministry of Internal Trade and Consumer Affairs website the day before FMCO indicates a high level of business interest.

A successful total lockdown that would give health facilities the much-needed respite must be paired with the projected increase in vaccination pace and would depend on the successful adjustment and enforcement of current SOPs for workplaces, vaccination centers, individuals, public places and public transportation and other locations , especially given the nature of the airborne transmission of Covid-19.

* Dr. Margarita Peredaryenko and Ameen Kamal are part of the research team at EMIR Research, an independent think tank that focuses on strategic policy recommendations based on in-depth research.

** This is the personal opinion of the authors and does not necessarily reflect the views of Malay Mail.

Donna Muldrow - April 14, 2021
0
It was day seven of Caroline Mark's Australian quarantine, and the tribe began to feel real. "The hardest part," the surfer said to...
© All Rights Reserved By Chiropractorsdailynews
MORE STORIES

A Holistic Method to Higher Menstrual Well being and Hygiene: Entrepreneurs...