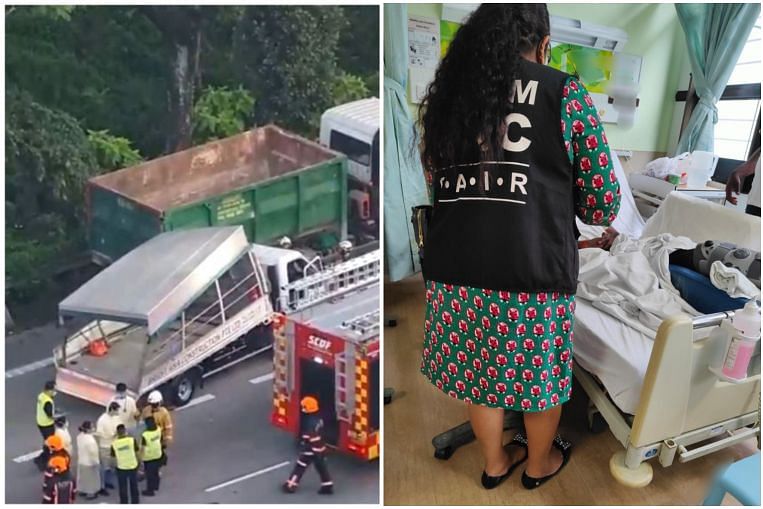 SINGAPORE – A second migrant worker who was in the back of a truck that crashed into a stationary dump truck on the Pan-Island Expressway (PIE) has died.

The man, Mr. Sugunan Sudheeshmon, 28, from Kerala, India, died in hospital from his injuries.

In a Facebook post on Friday morning (April 23), the Migrant Workers’ Center (MWC) said: “We are in contact with his mother, who also works in Singapore, to offer her and the family our support and deepest condolences. “

A volunteer from ItsRainingRaincoats (IRR) nonprofit said an IRR advisor spoke to Mr Sugunan’s mother, who is a domestic worker here. She had visited her son in the hospital the Thursday evening before his death.

Mr. Sugunan had a wife and an 18-month-old child. The IRR volunteer added that his wife was unaware of her husband’s fate.

MWC said it was working with the worker’s employer to provide the documentation and claims required to seek compensation under the Work Injury Compensation Act (WICA).

Five workers remain in the hospital following the Tuesday morning accident, one of whom has been moved from intensive care to the highly dependent ward, MWC added.

In the back of the truck sat 17 workers on the way to a construction site in Woodlands.

Mr Toffazal Hossain, a 33-year-old Bangladeshi, died in hospital on Tuesday from his injuries. MWC said it contacted Mr. Toffazal’s brother to better understand their family situation and the support they need.

He is survived by his parents, three sisters who are all married, a younger brother who is still studying, his wife and a two-year-old son.

“He was the family’s only bread winner. We are also in contact with Mr. Toffazal’s wife to find out how else we can help them get through this very difficult period until the WICA compensation is paid, ”said MWC.

The truck driver, a 36-year-old man, was arrested for negligent driving, which resulted in death.

The police were made aware of the accident on the PIE in the direction of Changi Airport in front of the Jalan Bahar exit at 6:06 a.m. The Singapore Civil Defense Force said two people were found trapped in the back of the truck. They were rescued with hydraulic devices.

The truck passengers between the ages of 23 and 46 were taken to the National University Hospital and Ng Teng Fong General Hospital. Two of the workers were passed out after the accident.

The Straits Times estimates that all passengers are foreign workers working for Bright Asia Construction.

MWC said in a previous Facebook post that workers should be protected under the WICA as the accident happened on the way to the construction site.

Contributions to the workers concerned or to support needy or distressed migrant workers can be made at https://www.giving.sg/mwaf.

Wholesome Bengal – a holistic platform for bodily and psychological wellbeing

Tami Meker - April 12, 2021
0
When we think of health, we automatically assume that the term only refers to physical well-being and fitness. Over time, however, we find...

A holistic strategy to managing mycotoxins in poultry

Tami Meker - February 3, 2021
0
Recognition and attenuation of emerging and masked mycotoxins and their synergistic effects. Scientific research has gained significant insight into the harmful effects of individual mycotoxins...

Tami Meker - May 12, 2021
0
One person died after being hit by a car in Oelwein.The accident occurred on Tuesday evening (May 11) at around 5.45 p.m. in a...
© All Rights Reserved By Chiropractorsdailynews
MORE STORIES

Lady taken to ECMC with minor accidents after accident this morning...